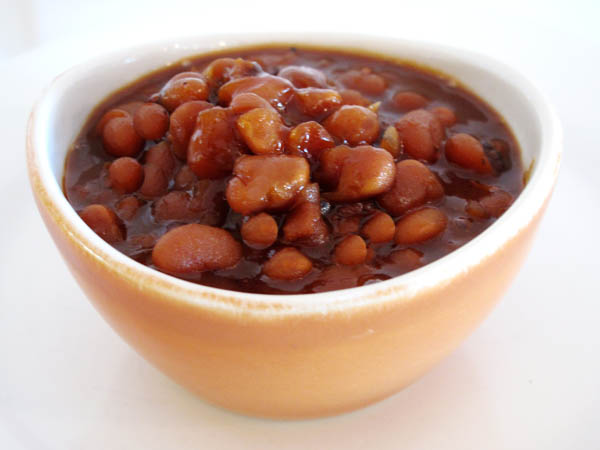 Baked Beans are a staple of New England cooking - in fact Boston gets its nickname “Beantown” from a long history of making baked beans. Take a drive through some of the small towns in New Hampshire, Maine or Vermont and you’ll undoubtedly find signs for a “Bean Supper” at a local town hall or church. It's a fundraising ritual almost as old as the country, started by women's auxiliary groups during the years after the Revolution, as a way to raise money to pay the local minister. Boston Baked Beans are always slowly baked with molasses and a few other simple ingredients and traditionally served with Brown Bread (see recipe from Yankee magazine here-  http://bit.ly/uExc9O )

3. Cover pot and set in oven. Bake until beans are tender, about 4 hours, stirring once after 2 hours.

4. Remove lid and continue to bake until liquid has thickened to syrupy consistency, 1 to 1 1/2 hours longer.

5. Remove beans from oven; stir in remaining tablespoon of molasses, vinegar, and additional salt and pepper to taste. Serve.

Interesting history of those Bean suppers! This looks mouth watering and perfect for the season.