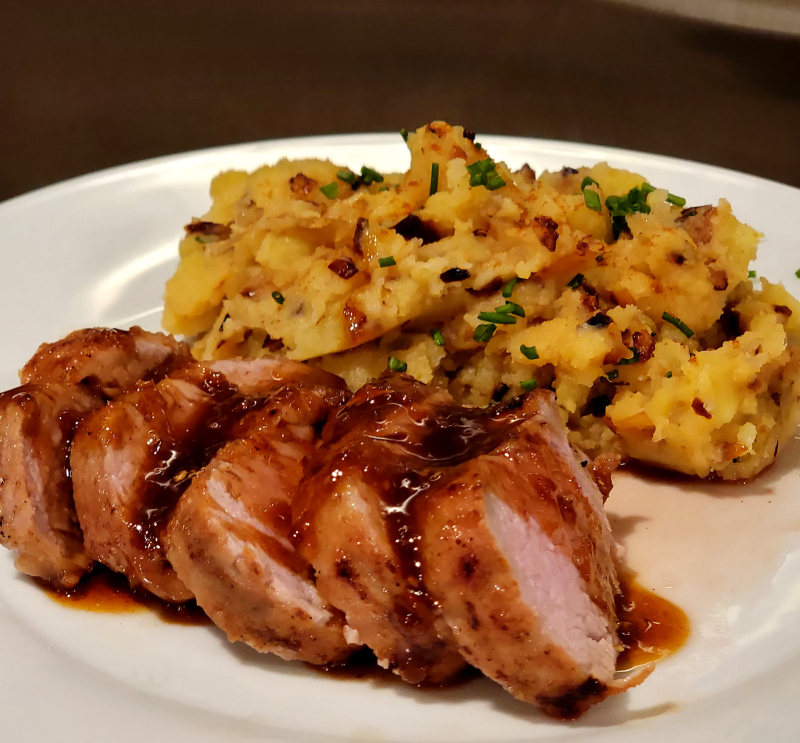 I first saw these potatoes prepared on an episode of Milk Street Kitchen and thought they looked delicious. Their version is modeled after the potatoes they had tasted at Samoborska Klet restaurant in Zagreb and is a simple one-pot recipe. The potatoes are rustic and full of flavor from the slow cooked onions – a perfect side dish to Maple- Glazed pork tenderloin

2 tablespoons grapeseed or other neutral oil

1. In a large Dutch oven over medium, heat the oil until shimmering. Add the onion and ¼ teaspoon salt, then cook, stirring often, until softened and well browned, 20 to 25 minutes.

2. Remove the pot from the heat. Transfer the onion to a small bowl and set aside; reserve the pot.

3. In a colander under cold running water, rinse the potatoes. Drain well, then add to the pot. Stir in ¾ cup water and ½ teaspoon salt, then distribute the potatoes in an even layer. Cover and bring to a boil over medium-high. Reduce to medium and cook at a simmer, stirring occasionally, until the slices almost fall apart when poked with a skewer, 15 to 20 minutes.

4. If there is water remaining in the pot, increase to medium-high and cook, uncovered and stirring often, until no moisture remains.

5. Reduce to low, add the butter and cook, stirring and mashing the potatoes with a spoon, until the butter is melted and incorporated, about 1 minute. Stir in the onion, paprika, and ¼ teaspoon each salt and pepper. Stir in 1 tablespoon of the chives, then taste and season with salt and pepper. Transfer to a serving dish. Sprinkle with additional paprika and the remaining 1 tablespoon chives.

Thanks for sharing. I saw the episode and just searched it and found your blog. Would love to receive updates. Thanks

So happy to have found your site. I get so tired of the runaround you are given on the Milk Street site. They want you to join or else! I signed up for their annoying and too frequent emails but that only gets "current season" recipes and the shows on my local PBS channel don't ever seem to be in that time frame. Just printed out your Croatian potatoes and the Maple Syrup pork tenderloin. Thank you very much.
However I couldn't find a print link and had to copy to Word to print.

Hi Madeline, thanks for your comment - I just added the file to print recipe! Let me know if you ever are looking for a specific recipe - happy to share if I have it!
James